Studies in the History of Philosophy

The Polytechnic Student Castorp and the Role of Culture

The Polytechnic Student Castorp and the Role of Culture

In his Magic Mountain Thomas Mann has placed a sentence that has its own history. He remarked that Hans Castorp spent four terms studying ship building on Gdańsk Polytechnic. Polish writer, Paweł Huelle (what is remarkable, born in Gdańsk), fascinated by this sentence, wrote a novel describing the Gdańsk episode of the character of Magic Mountain; the title of the novel is Castorp. The article focuses the essential motifs of both novels in the perspective of the question about culture. As is widely known, one of the most important inspirations of Mann’s writings is the philosophy of Arthur Schopenhauer. His metaphysics of will, the play of the powers of generating and destroying, is seen by Mann as a project very attractive for artistic purposes. Nevertheless, as Mann sees it, the project whose the ultimate result is melting individual in the shapeless world of metaphysical will is hostile towards life and endangers the forms of culture. Castorp, a literary character, subjugated by dark and blind powers of will, is an example of man who acknowledges the fact, but opts for life. He undertakes an attempt to restrain the powers and to give them civilized and more agreeable form, which is an attempt to struggle for the value of life, which in Mann’s interpretation has a moral character. According to the philosophy of Heinrich Rickert Castorp, the literary character, is a man who strives for improving his own nature and sees it as an activity that is to be fulfilled in the sphere of culture. He wants to subject his conduct and activity to norms and settled values, treating this attitude as the ethical imperative. He strives for elaborating timeless values as a counterbalance for the metaphysical being of will. In a wider context it depicts the process in which the transcendent being is replaced by “transcendent obligation”. 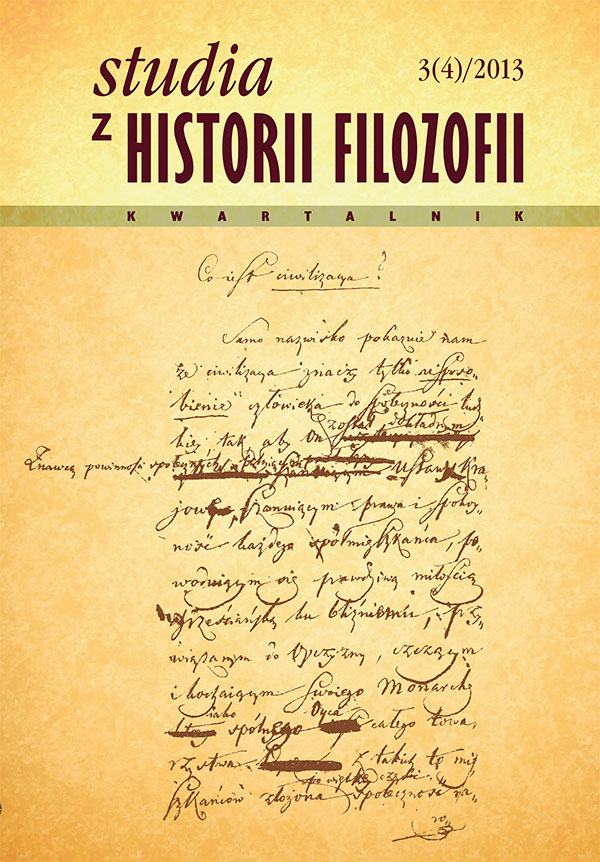 Number of views and downloads: 167
Number of citations: 0