The attribution of monuments of Polish sculpture of 17th century, among them the Kołudzki family chapel, makes a serious issue. It is been barely touched upon in the literature and scarcely illustrated. The attribution of decoration of the chapel and the portal leading to its interior has not been confirmed by the sources. It has been attributed to two leading personalities of the art of sculpture on Polish territory: Sebastian Sala and Wilhelm Richter.

The characteristic feature of the workshop mounting the elements of the chapel interior was not so great precision, however the architectonic elements represent quite high level of workshop skills. The surface of sculptures had been finished in various ways or had reacted to destructive factors differently. In the set of sculptures and bas-reliefs one can notice distinct differences in the way and level of precision of cutting the stone and the skill of the chisel, finishing the shapes and forms, anatomical correctness and relation to the surrounding space.

The figures of apostles had been chiselled to soft, streamlined forms, and create the impression of being created by a hand accustomed to working in material softer, than stone. Particular forms fluently flow one into another and there in no precise division lines. The sculpture does not much interact with the surrounding space. Some effort had been made to individualise the faces. Similar softness of finish, with a tendency towards imprecise cutting can be noticed in the figure of crucified Christ. His face expresses a drama, the body has been treated in a summary way, only the chest, more sculpted at the sides creates light-and shade effects.

The figures of little angels in the crowning seem to repeat the pattern once worked out in the workshop in versions dependent on the skills of particular sculptors. They characterise with clear imperfectness of form and its soft finish. They demonstrate the lowest artistic quality in the entire set of sculptures and basreliefs of the chapel furnishing. Place at the highest location, less visible, they have been left in more or less draft form. They are dominated by bulging, as if swollen shapes. Quite well rendered anatomy characterises the sculpture of crucified Christ, surely modelled after some painted or engraved pattern. The forms are chiselled quite softly, as if in a painter’s manner, they seem liquid. In the group of soldiers surrounding the open grave their elaborate poses draw the attention as well as the suggestive rendering of the anatomy of musculature and perspective foreshortenings. Soft finish of forms characterise also the bas-relief of the vernicle as well as the winged heads of the putti.

The above remarks allow to make a statement, that in the works on architectural and sculpted furnishing of the Kołudzki family chapel participated different people, that characterised with diverse technical skills and uneven artistic level. Basing on the analysis of formal features of sculptures and bas-reliefs one can distinguish the input of diverse (three?) makers. One of them represents soft, pattern-like forms related with the shape of the used block of stone (mainly fi gures of the Apostles). The second is characterised with higher level of artistry, boldness of chiselling and anatomical correctness (the figure of crucified Christ). The third one liked to employ perspective foreshortenings and eagerly sculpted details of artefacts or musculature (soldiers of the Resurrection group). Sculpture of the portal reveals the hand of a master accustomed to shaping forms different, than those encountered in the interior of the chapel – rigid, boldly and precisely chiselled. Perhaps then it is worth asking the question: do one deals here with a multi-stage work with different masters and workshops employed? The answer is as follows: one rather deals here with one workshop and the activity of apprentices of diversified skills and abilities.

Any further conclusions as to the question of attribution of the chapel requires detailed formal analysis of the remaining monuments essential for such reckoning, such as the portal leading to the chapel, 4 other portals in the Gniezno cathedral that sources attribute to Richter; the works of Sala confirmed by sources (the tombstone of Opaliński family in Sierakow and the Oppensdorf family in Głogowek). The problem “Richter or Sala” still awaits its fi nal solving. Also the dependences between the furnishing of the Kołudzki family chapel, the Mourning of Christ Retable in St. Nicholas Church in Gdańsk and Princess Anna Wasa memorial in Our Lady’s Church in Toruń in particular. One should pay attention to questions vital for the conducted research, that is to the workshop works’ mode and the execution of masonry.

Both monuments reveal different way of execution of figural sculpture. The quality of Toruń monument is much better, which may be the effect of employing a sculptor of special, higher skills to work on the royal foundation. However in both cases one can notice similar mode of working – careless treatment of less visible parts or leaving them entirely unfinished, as well as a specific treatment of smaller details of sculptures or those more exposed to destruction, that had not been entirely carved off the block of stone. The question that arises in this case is whether and to what extent the same workshop could have been employed to execute both monuments? Taking into consideration the similarity of architectonic structure of Toruń portal (ca. 1636), the Gniezno Retable (before 1652) and the Mourning of Christ Retable in Gdańk (1662) one can risk a hypothesis, that the design prepared for Princess Wasa memorial in the circle of artists related with the royal court (Ghisleni?), has been exploited by the workshop working on its’ execution also to execute the other two works mentioned above. However the further form the original model, the stronger manifested the features of Northern art. The very much probable answer to the question of what workshop has been subject of the analysis can be: one of the Gdańsk workshops, perhaps of Wilhelm Richter, which can be confirmed or excluded only by similarly conducted analyses based on a direct inspection of each monument and rich digital photographic documentation. 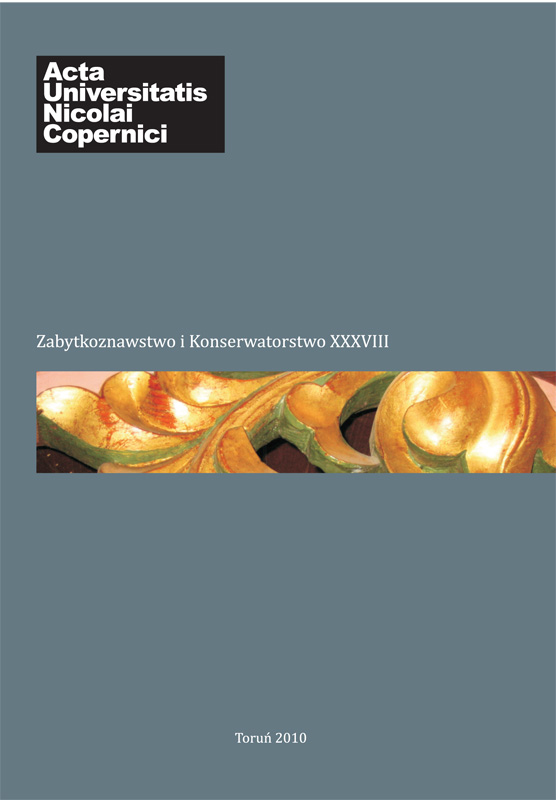